skip to main | skip to sidebar

REALITY BEHIND THE ARTWORK

> ALL ARMAMENT PRODUCTION RENDERED ILLEGAL BY THE UN
Mass media daily present war as an expected, inevitable human activity. War though is murder in mass scale. This encountering simply proves that humanity is still in the middle of its savage stage of evolution and doesn't seem, for now, to have the mental ability to evolve further on. Why the killing of one person is punished while mass killing is considered and promoted as profitable business? Would the syndicates and the working class support the idea of desarmament even if they had to loose their jobs? Would we take that risk? What if we knew that we would have to face the means of destruction we ourselves produce?

Relevant projects by Kostas Beveratos:
>MURDER OFFICIAL: Pretend that you don't know
>WAR GAMES: Wow, you must be an intellectual!

> THE END OF RELIGIONS?
Religions are meant to serve the purpose of enlightenment of individuals or the one of manipulating and authoring the society? Religious leaders often, more or less and all around the world interfere into major political discussions demanding their voice to be heard along with these of the political forces. Often they demand to impose their interests by the right that the enormous organizations properties and the influence that the promise of salvation has on the majority of people, gives to them. Can "Temporal Power" be "Holly"?


> PUBLIC SERVANT? NO, THANK YOU!!!
Privileges to all society members is what can make a society function better or is it the development of the personal need for responsibility towards the fellow humans? The model developed in Greece offers the experience of the creation of privileged public servants totally failing their responsibilities. Often employed as a way for the governing political parties to gain control on voters, citizens unqualified and indifferent to their professions are been placed in crucial for the society positions or simply wherever it could be possible. By the time most people hope that They as well could become privileged in this way, no one opposes to this. In this manner of running the State, capabilities and performance are values unknown in order for one to be promoted to public leadership.

Relevant projects by Kostas Beveratos:
> "I'd like to walk around wearing a pin that would state: “I DON'T SUCK MONEY IN”. But I'm scared. I'm scared they would lynch me."
>ATHENS 20070922: Day without cars is a joke

> SOLON! SOLON! OF THE HALF OR OF THE 'HOLON'?
Who runs a Democracy? Is it the public? Is it the businessmen and the media they own? Is it the religious organizations? Why someone who lives in the most privileged area can make decisions for those who live in lower class neighborhoods? Who represents whom? Is it just a system promoting business for some in an an-orthodox manner? Do all have equal possibilities in this Democracy? Or some participate to it only for been used? Is being a politician a profession like any other? Can a democracy evaluate wether its representatives carry values wider than their private interests?

Relevant projects by Kostas Beveratos:
>"MY FATHER WANTED ME TO RUN THE FAMILY MARKET. I chose to become a politician..."
>PLATO, POLITEIA: "So, do you remember at the last selection for leaders, what kind of people we selected? Of course I do, said he"
>KILL FAITH, not humanity
>SECURE THE PUBLIC SPACE, money is no value
>THERE IS NO VISION from the inside of a box

> COMMUNIST PARTIES DENOUNCE THE TERM "REVOLUTION"
Great promises for justice, equality, salvation, great promises for revolution and great promises in general have often become great traps for human hopes. Communist Parties often promote the Revolution as the only way for the society to evolve towards equality and better living. Can acts of violence though bring anything new to us? What if violence simply squanders too much and offers very little? What if the demand for violence simply represents the incapability of social groups to prevent their mistreatment? But then, maybe revolutionary is to provide these groups with such capabilities, instead of imposing "promising" authorities.

Relevant projects by Kostas Beveratos:
>LOUD PROTEST MAKES NO SENSE, only good for my nerves

> SEX AND DEATH: THE RELIGIONS CLAIM THE COPYRIGHT
What makes violence acceptable and sexuality a taboo? Is it a mentality imposed by someone’s interests? Who has the authority to approve of what is ethical and what is not? 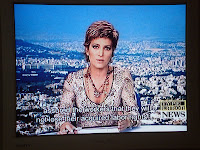 We live in a fiction world.
A world which our deficient minds have created for us to live in.
A “Real Virtuality” in which our beliefs create for us an often tragic reality.
“The Type Error News” occurred as one more product of deficiency between many.
It appeared after a chain of type errors at a major publishing company.
The false news caused by these type errors spread through TV, radio and internet, confusing millions of people around the world.
A fiction world product of insufficient abilities, fighting another fiction world product of other insufficient abilities.

> Reality behind the artwork


>>
Any similarity to real persons or events is completely coincidental.